Check out the Facebook party HERE!
*The stage lights fade in to reveal the IWS stage, which has been transformed into a castle*

Tabi: I’ve always wanted to wear one of these, but man I had no idea how tough they were to get into!

*Tabi winks as the audience laughs*

Tabi: Today we’ve got quite the treat for you, he’s come from the far away land of Linmus and he’s here to share with us his story, put your hands together for Solus Brenner!

*Audience stands and cheer as Solus enters the stage, clothed in an Elvis Presley costume*
*Nervously he smiles and waves at the crowd*

Tabi: Wow! I can’t believe you took the dare! That’s awesome!
Solus: Thanks.
*Solus smiles*
Tabi: Hey, a dare’s a dare and Rem said I could dare you to do anything. And hey! As promised, I dressed up too! Although I think I’d be more comfortable in Elvis bell bottoms than this dress.
*Solus and Tabi laugh together*
Tabi: Have a seat, and thank you so much for joining us on the show!

*They take their seats in comfortable chairs lined in velvet*

Tabi: So how long have you lived in Linmus?

Solus: Linmus is actually in Adrylis, which I’ve lived there for as long as I can recall. I’ve lived in Linmus for five years now.

Tabi: And does Adrylis exist on Earth or is this an entirely different world?

Solus: It’s an entirely different world. I supposed you could say it’s like a magically inclined Earth, but it runs a bit deeper in the mix.

Tabi: I’ve heard the kingdom of Linmus has been going through a crisis. Is this true?

*Lowers head for a moment before looking back up at Tabi, sadness fills his eyes*

Solus: Linmus was seized by terrorists that sought revenge on the royal family for exiling them. They call themselves the “Order of Helix,” and their primary goal is to usher in a new era of magic.

Tabi: How do they plan on doing that?

Tabi: He’s the prince you work for, correct?

Tabi: And why his blood?

Solus: Ah, I forgot to mention that Remiel carries a unique power given to him at birth. He is known as a ‘Bloodlinch,’ an illegitimate child born from a non-magical being and a high-ranking mage. In this case, his mother being an Arcana, his father a magicless noble. Back to the point, my apologies.

Solus: The Order of Helix seeks to usher in a new era of magic because the royal family has supposedly poisoned Adrylis with their idealism.

Solus: Their bloodline stretches too far a line for these terrorists, composed of exiled mages and those that want to change fate. They were hoping to eradicate any trace of the Vesarus family, but Remiel and I managed to escape into Adrylis.

Tabi: Sounds like you’re lucky to be out of there.

Solus: Remiel immediately got the motivation to save his kingdom not long after he learned that his parents and many others in the kingdom grounds were killed.

Tabi: What a tragedy. Well, I hope you do find victory. So what’s it like being a servant to Prince Remiel?

*Solus smirks to himself before clearing his throat*

Solus: Remiel can be a hassle to work with. He is rather eccentric in his personality, always running off at the mouth. He’s stubborn, hot-tempered, and he can be a little too impulsive.

Solus: He even has moments where his arrogance gets the better of him, and it becomes obvious that he has the makings of your typical prince still coursing through his veins. But he’s also strong-willed and his sense of justice is unmatched by any other person that I’ve known. He isn’t afraid to be himself despite the title that he was given at birth, even if it means stepping out of the box and being resented by others.

Solus: Indeed. Being at his side is an adventure, because you never know what he is going to do next. Acting as his shield is worthwhile because I’ve seen so much of him over the years. I’m proud to call him my friend.

*The sounds of ‘aww’ fill the auditorium*

Tabi: That sounds like a wonderful friendship you two have developed. So how did you meet Prince Remiel?

Solus: When I first arrived in Linmus, Remiel was running about the marketplace, hiding from his mother, Rira, in some spirited game he came up with that he didn’t let her in on. He was eleven years old then, I was about twelve.

Solus: Yes. I don’t know what made him look over at me, but when he did, he ran over to me and took my hand, and he pulled me into an alleyway. I remember asking what he was doing, and he said that I looked like I needed a good time. I can’t recall the look on my face, but it was enough to make him laugh.

*Solus and the audience chuckle at the memory*

Tabi: Would you consider him to be your closest friend?

Solus: Of course. We’ve come far with our friendship. Though Leilana has quickly risen in the ranks as well.

Tabi: I’ve been hearing a lot about this Leilana. She’s a mage, correct?

Solus: That she is. She is a novice Arcana, a mage in our world. She didn’t have much experience when we first met, but with grimoire in hand, she stepped up to the plate and worked towards improving.

Tabi: How did you two meet?

Solus: It’s a bit of a tragic tale. We left our homes roughly around the same time, Leilana to start her pilgrimage gathering totems belonging to people that she meets along the way, and Remiel and I after losing Linmus. Leilana managed to reach a village called Paluna, and while she was there, one of her allies hit a breaking point over learning information about what their true mission was.

Solus: Yes, the town ended up burning for it. We happened to arrive around the time of the chaos while looking for a place to stay for the night and I stumbled upon Leilana nearly being killed by that same ally. I saved her life.

*The audience applauds in approval*

Solus: Afterwards, I suggested to Rem that we get her to safety. He agreed to it, and we were going to part ways in the nearest city. But after we found out of an opportunity to save Linmus through Leilana’s grimoire, and we reunited in the city during an attack, we made an agreement to work together to secure Adrylis from harm. Turns out that Leilana needed us as much as we needed her.

Tabi: And how would you describe your relationship with Leilana?

*Solus grins from ear to ear*

Solus: To be rather cliché…she is my world.

Solus: I didn’t know it when we first met, of course.

Tabi: Not usually, no.

Solus: But as the days turned into months, I found myself drawn to her. I didn’t start considering anything until after she took a chance and saved our lives. It showed off her determination and where her heart lied. I may move a bit fast though, romantically. At first, she was really biting and I was fine with the idea of it given that our relationship is practically taboo.

Solus: I’m the only non-magic user on our team, and she’s an Arcana. And our age difference, well… I’m almost three years older.

Solus: She truly is an incredible person, though. I suppose we’re cut from the same cloth, and that is what makes her that much more appealing to me.

Tabi: It does sound like you’re smitten and I hope your true love will conquer all.

Tabi: Now, let’s move on to you. Now, I know this is somewhat of a personal question so if you don’t feel comfortable answering don’t feel like you have to, but how did you find out that your memory was altered?

Solus: I don’t mind discussing that. I remember not long after I was given a place at the castle, Remiel began asking me how I ended up in Linmus, because he hadn’t seen me around before. He kept asking me questions. I didn’t know how to answer them. I couldn’t answer them no matter how much thought I tried to put into his questions.

Solus: Indeed. It wasn’t long after that that Remiel figured out that I had amnesia and I remember that I started crying about it in my room. Remiel didn’t leave my side throughout it even though he didn’t say a word to me.

Tabi: What a good friend. So what’s it like not really having any memory of where you’re from?

Solus: It gives me time to think up glorified thoughts of my previous life. At the same time, I do find myself wondering a lot about who I was, where I lived, and what I was doing before ending up in Linmus. I don’t mind the idea of making new memories, though. It far outweighs basking in the past.

Tabi: That’s a very healthy way to look at things, Solus. Well, it looks like we have time for just a few more questions.

Tabi: What is your favorite food?

Solus: I like so many things, but I would say that I’m a fan of cream puffs. They’re a comfort food of sorts.

Tabi: Yum! I love cream puffs. My grandmother used to me them for me when I was little. They really are a comfort food. Do you make them?

Solus: Yes. I spent a lot of time cooking in the kitchen when I lived at the castle. I rather enjoyed it.

Tabi: And if you had unlimited resources, what would you do and why?

Solus: I don’t think I could imagine what I would do with unlimited resources. I try to make the most of what I have now, because someday, it will be gone. Maybe it’s just a realistic aspect that I’ve developed, but I can’t see myself wanting it.

Tabi: What a wise answer.

*The audience cheers in agreement*

Tabi: Thank you for coming on the show, Solus, and I wish you the best of luck in overcoming the Order of Helix!

Solus: Thank you…thank you very much.

*Solus takes a bow before exiting the stage. The audience goes wild with applause*

Tabi: Don’t forget to grab your copy of “First Words: Final Lesson” by Shakyra Dunn and stay tuned for “The Final Lesson!”

Tabi: Tune in next Friday for our next episode of Interviews With the Stars where we’ll be interviewing Beatrice Brace from Deborah Baldwin’s Bumbling Bea. Check it out here: https://www.facebook.com/events/198962823975110.

Have a great night everyone!

*Audience continues to applaud as Tabi exits the stage*

SYNOPSIS:
A recently-crowned princess with a thirst for magic accidentally destroys her home. A simple youthful rebellion grows into a lifelong friendship. A young woman meets reliable allies. And a young boy is dealt a harsh hand when he sets out to make his own path. Four tales. Four parties. All intertwined to set the stage for a bigger event. The sense of adventure builds as lessons prepare to be learned.
Available on Amazon: http://amzn.to/2gwf0aE 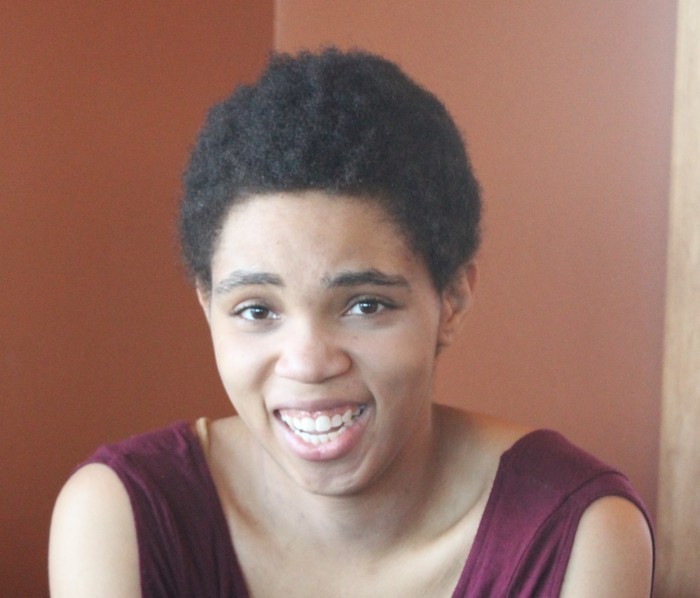 ABOUT THE AUTHOR:
Shakyra Dunn can’t stray away from the impression that there is always an adventure around every corner! When she isn’t playing the role of the Creator, she is marching through the worlds of her favorite video game characters or taking drives around her city to see the sights. Born in Chicago, Illinois, she currently resides in Cedar Rapids, Iowa, striving to experience more than the little town.
Author Website: http://shakyradunnauthor.wixsite.com/seerofwords
Facebook: https://www.facebook.com/SeerofWords/