*Lights of the SWC stage light up as the host enters the stage.*
Tabi (host): Hey, hey everybody! Welcome to the season 3 finale of Interviews With The Stars.
*The audience applaud as the camera pans over the cheering crowd.*
Tabi: Tonight, we will be in the presence of an actual apothecarist. Can you believe it? Well, without further to do please give a warm round of applause for Mierta McKinnon, everybody!
*The room fills with the sounds of cheering fans as thirty-five-year-old Mierta McKinnon enters the stage. His appearance is amazingly like British actor Matt Smith. He is wearing a royal blue robe with a blood red tunic underneath. There is a scar on the left side of his face from a chemical accident.*
Tabi: We are so thrilled to have you here today, Mierta.
Mierta: Why, thank you
*Mierta and Tabi take the seats placed in the center of the stage*
Tabi: So, tell us a little bit about yourself.
Mierta: Yes. My name is Mierta. I am the son of a court physician, and I come from the kingdom of Aracelly in the land of Iverna.
Tabi: Wow, you’ve come a long way to be here. Good thing we’ve invented time travel and were able to teleport you here.
Mierta: *rubs hands together* Yes, well, reckon there’s an actor I am written for may have contributed to this.
Tabi: What is Iverna like?
Mierta: Oh, it’s fantastic, really! Iverna is made up of two kingdoms – Aracelly, which is made up of witches and warlocks, and Vandolay, which is a kingdom of men.
Tabi: I heard that there’s a plague rampaging through your country. What exactly does this plague cause? Why is it so bad?
Mierta: My country? No, no, no. That’s Edesia. Another country. But a plague is coming. Yes.
Tabi: That sounds horrible.
Mierta: It is. I…I’m not really supposed to be talking about this, you see. It was in my Rite of Wands ceremony. What our ceremonies entail in my country are forbidden to discuss. That’s partially why I’ve been spending all my time to conjure a cure. Only I haven’t been successful, but I’m determined now more than ever to change this fate. Especially after…*he stops himself* Sorry. Spoilers. Can’t talk about it. So, sorry.
Tabi: Well, I definitely hope you can find a cure. Now, on a personal note could you tell us what do you like to do for fun in your world?
Mierta: I compound chemicals together.
Tabi: Oooh that sounds exciting! And who is your role model?
Mierta: I…*crinkles his brow* I don’t know, really. I suppose that would be my Mum.
Tabi: That is wonderful. Moms are important. And I heard something about you seeking to become a warlock. Is this true?
Mierta: *offended* What blubbering buffoon told you this? I am a warlock! I became one after I endured my Rite of Wands ceremony.
Tabi: Oh? What all does this entail?
Mierta: All witches and warlocks in the kingdom of Aracelly on or after their twelfth birthday must choose whether to participate in the Rite of Wands ceremony in order to gain their powers and practice spells.
Tabi: That sounds simple. What is this Rite of Wands ceremony?
Mierta: It’s not. Trust me; the Rite of Wands isn’t just a test. It will dictate your fate and has driven certain witches and warlocks to madness.
Tabi: Yikes! Now, we all know you have some awesome powers that are unheard of in our world. Would you mind showing us an example of what you can do?
Mierta *smiling mischievously*: Of course!
*Mierta stands and begins a summoning spell.*
Mierta: Kibunika!
Suddenly, the room is filled with green goo, bouncing around like balloons. It flies through the room, as it starts the confetti machine causing soft paper to fall about the room*
Tabi *laughing at the spectacle*: Oh my word, Mierta, what is this?!?!
Mierta: This is Kibunika! It is…*his voice breaks as he remembers, crinkling his brow as he looks up at the ceiling* forbidden spell.
Tabi: You definitely know how to summon a prankster, I’ll give you that.
Mierta: It’s not a prankster! It’s…
*Screams are heard from the audience as the goo directly hits a series of lights above them, causing them to explode*
Mierta: No! No! No!
*Camera zooms in on Mierta as he rushes into the audience to stop the Kibunika. It bounces off the smashed lights and aims right for him. He reaches up with his wand and yells a spell, causing the goo to explode and disappear. Camera repositions to Tabi as the show comes to an end*
Tabi: Put your hands together for the magnificent Mierta McKinnon! And if you haven’t read his story, definitely head on over to Amazon to grab your copy of The Rite of Wands. 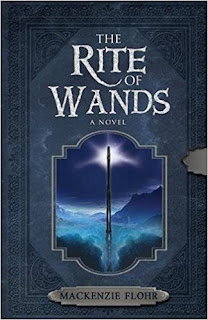 The Rite of Wands

One boy…one Rite… And a world of deadly secrets that could change the course of history—forever.
And so begins the tale of Mierta McKinnon. When a horrible fate reveals itself during his Rite of Wands ceremony, he must find a way to change not only his destiny but also the land of Iverna’s.
Forbidden from revealing the future he foresees to anyone, he is granted a wand and his magical powers, but still must master the realm of magic in order to save himself and those he loves.

Mackenzie is the award-winning author of the young adult fantasy series The Rite of Wands. A storyteller at heart, she loves to inspire the imagination. Mackenzie makes her home in Michigan, where she is currently penning her next adventure.