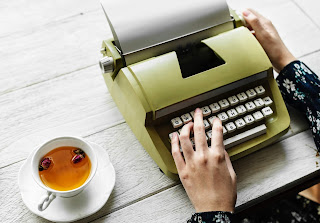 One of the first bits of professional feedback I received about my writing was in regards to characterization. Now, in the beginning I thought “how complicated can that be, right? I’ve got solid characters, they’ve got attitude. How much more characterization could my characters get?”

Well, it turns out I had a lot to learn and I’m sharing my findings so that you don’t have to go through the struggles I went through (and save some moolah) in learning this important lesson.

The thing about characterization is that even if you think you’ve got a strong story with meaningful characters, if you haven’t established these five things it doesn’t matter how good your story is.

So when I received the feedback that I needed to improve characterization in my writing I immediately went to the drawing board. After a lot of research and much thought I came up with these five things to improve my characters.
Once I nailed these down for each of my characters, I found that they had become that much more real and the story benefited immensely for it.

We all have them, so why not your story’s MC? But they can’t just be any old habits, they have to tell a deeper story about the character. Does this character have a nervous twitch? Do they knock on wood before a big meeting? Do they twirl their hair? And why do they have this habit in the first place? What was the origin story behind this habit?

It’s just as important to know the source of the habit as it is to know what your MC’s habits are.

Most of this may never even show up in the story, but developing this for each of your characters will make them stronger and more real in your story.

Step 2: What is their outlook on life?

Do they view life like a monotonous treadmill or do they view everything as an adventure just waiting to be explored?Knowing how they perceive the world will help you when writing their story because it will define how they react to situations, how they relate to other people, and their choices in life. It will also help determine some of the aspects below.

All of these things help define the character and so the story becomes more immersive because I spent a few minutes figuring out each one of my character’s negative and positive personality traits.

Step 4: What motivates your characters? What are their goals?

Probably one of the most important aspects of a story is knowing what motivates the characters in it. All too often I’ve read stories where the characters are running all over the place, making inconsistent choices that don’t align with their characters. A big part of this is the author forgetting what they defined as their character’s motivators from the start.

To keep from making this blunder, WRITE THESE DOWN! And refer back to them until the completion of your story. 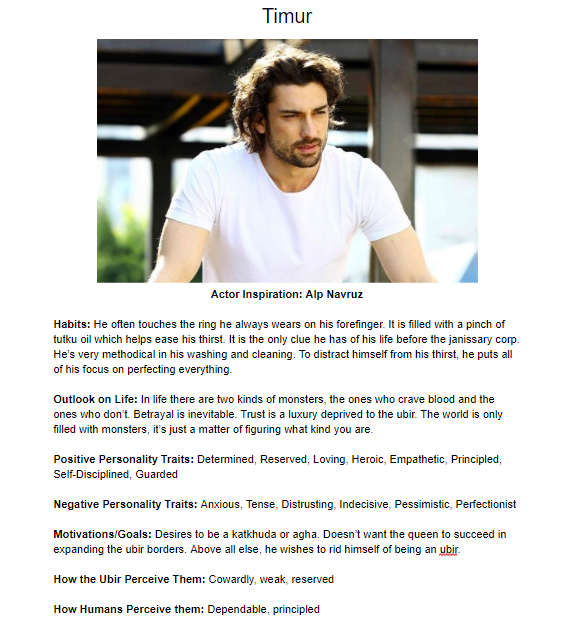 Step 5: How do others perceive them?

In my novel “Timur’s Escape” I had to define two different perspectives since I was not only dealing with humans, but a secret organization of vampires based on the Turkish mythology of ubir. If this were reality, these two different groups would have completely different perspectives. They would prioritize things differently, therefore, when perceiving someone they would have a different viewpoint on that character
In the example of Timur, I wanted to make this distinction clear by asking myself “What characteristics would ubir appreciate? How would this impact their view of Timur based on his characteristics?”. I defined that ubir would appreciate boldness and loyalty. Since Timur is reserved and despises the ubir lifestyle, this would give other ubirdi members a negative perception of him (i.e. cowardly and weak).

Understanding perception from all angles, defining your character’s motivations, personality traits, outlook on life, and habits will all help your story flourish and create impactful characters that readers will remember.

How do you build strong characters? Share your tips on the comments below!