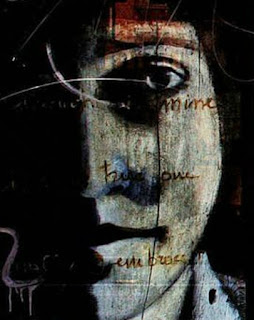 Ms. Cotillard, head of the Art department and French teacher at Tompkin’s Academy, was proud to award this year’s Top Student Artist Award to Amadeus Valensi for his painting entitled “Bulls-eye” (Photo, right).

“It means whatever you want it to mean, but to me it represents loss, desire, and the courage to survive,” Amadeus told reporters at the Academy’s school newspaper when asked the meaning of this painting.
Unlike other artwork Ms. Cotillard evaluated, Valensi’s art was displayed on an 8 by 10 piece of wood allowing the natural grain to show through the surface. Reporters were unable to get a clear answer as to why he chose this form of canvas, but the result is beautifully intense.
The painting is of a boy with a single eye visible. The other one seems to be crossed out, indicated by the somewhat slashed-looking X. The words written across the boy’s face are not legible, another part of the painting Valensi avoided to comment on.
“I’ll leave that a mystery for you to solve,” was all he had to say on that note. 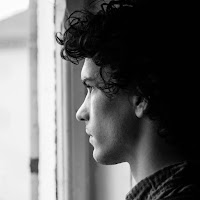 Amadeus Valensi (Photo, left) is currently heading into his Junior year at Tompkin’s Academy and is from Sulphur, Oklahoma. In his spare time he enjoyes playing basketball and is one of the school’s top forwards on the team. His parents, Nathan and Emma Valensi, are co-owners of a local sports bar. When asked where he got his artistic ability, they said it must’ve been from his great grandfather who used to make watches and that that was the extent of the creativity in their family.

You can direct your questions to Amadeus’s personal page here.

This post was sponsored by the faculty and staff at Tompkin’s Academy.

Tompkin’s School: For The Extraordinarily Talented

Synopsis:
Izara Torvik thought her life was over the moment that her father sent her and her twin brother to a boarding school in the middle of nowhere Oklahoma. She soon discovers that the school is not as ordinary as she thought and finds herself thrown into a battle against her inner demons that only have one desire…the desire to kill.

Synopsis:
Visions of the past, powers beyond belief, and a school that has been waiting for them for over a hundred years. Kain and Izara’s abilities have advanced far greater than they ever imagined possible and it’s all due to their new friend that has joined them. This year will bring the Torvik twins closer to solving the mystery of who they are, why they have these powers, and even closer to unveiling the school’s most haunting secret.

Tabi Slick was born in Kansas and grew up in the country where she was homeschooled for the greater part of her childhood. In middle school, her family moved to Davis Oklahoma where she attended public school for several years. Here she began her writing adventure and soon the world of Tompkin’s Academy came to life. After graduating from high school in 2008, she spent a few years in Puerto Rico and wound up in Texas where she graduated with a Bachelor’s degree in Linguistics from the University of Texas at Arlington. She was born with an immense appreciation for literature and continues to dedicate her time to her passion of writing.
Let’s Connect!
www.TabiSlick.com
Steemit | Twitter | Facebook | Instagram | Goodreads
www.TabiSlick.com
2017, blog, book blogger, Book Character Features, books, dark fantasy, paranormal, Tabi Slick, Tompkin's School, Tompkin's School Trilogy, young adult