Imagine a world filled with conspiracy, where the true ruler has been overthrown and every kingdom seems to be run by those with less than noble causes. This is the world of Absence of Color which follows the lives of two spies, known as Darby and Wagner, and a couple of children who all fall into an undercover mission to bring down the powers that be.

The Characters:
Let’s start with the spies, since the story begins with their story. Darby is more of the Sherlock Holmes character of the story. He seems to be gifted in everything that he does and Wagner envies him for that. Darby even seems to have a weird ability to communicate telepathically with some animals. I’m not sure how this gift will help in the grand scheme of everything, but I’m sure there’s a reason for this ability.
Wagner is a good sidekick, but has skills of his own that make him a likable character. He works well with a bow and has a strong desire to help others. This is a quality that not very many men in the story seem to have.
Lil Red is a character that appears a little bit later, but she runs the entire operation take-down from the inside out. She is one of my favorite characters because her cause is noble. The main villain, the Amir Mohana, is a terrible man with a taste for little boys and a dislike of women. Lile Red put an intricate network together in the hopes of bringing him and others like him down.
Frankie is the daughter of the Amir Mohana and knows first hand the wickedness that has ingrained itself within him. He had a hand in her mother dying and the abuse of one of her friends named Twig, a boy who was kidnapped to be his play thing. Conny and Frankie don’t realize this until it’s too late. Twig is thought to be dead, but Conny uses his magic that he’s been trying to develop to help revive him and get him away from that terrible place.

The Good:
S.K. Wee has a way of grabbing your attention with her writing that it instantly draws you into this world filled with strife, danger, hope, and a passion to overcome all obstacles. I really enjoyed the unique opening scene where Darby and Wagner are at the monastery undercover. It’s that kind of action scene that you’re not expecting to read first thing when you open a book, but it’s the very thing that keeps you turning the page.
I’ve previously mentioned that there aren’t a lot of of men in this world that desire to do what’s right for the good of others, but Conny is definitely not one of these men. I really fell in love with Conny’s personality and all of the risks he takes to help those around him. It’s an admirable quality that I hope doesn’t change. I know he’s bound to be a great mage in future entries and I hope he doesn’t lose what is good within him. The tension in this book is evident in many of the situations he’s involved in that will keep you on the edge of your seat, so be warned!
It was such a small part of the story, but I really enjoyed the Academy. I would’ve loved to have read more about this place and maybe experienced a class through the character’s perspective. We did get to learn about some of the different species in this world as well as meet new students, but what happens at the Academy is left somewhat of a secret that I hope gets revealed in the next book.

The Not So Good:
Warning: This book does mention drugs, rape, and the villain is involved in sexual assault on minors.
I put the warning above because I wasn’t prepared for these things going into this book and I kind of wish I had. They’re hard things to read about when you don’t know they’re coming, but rest assured the good guys do not think that this is right and do what they can to prevent these things from happening. There’s a lot of evil in this world, which is not a bad thing. It gives the few good people many opportunities to be great. I must say that for so much evil, the ending wasn’t as satisfying for me. I wasn’t sure how it was going to end and when it did I couldn’t believe it. It seemed to happen so quickly!
I would’ve loved to see Frankie express what she wants out of life, for her to have desires and wants of her own. Goals for her to work towards, but her story seems yet to be developed. I look forward to reading more about her and I really hope she grows up to be like Darby, a Whisper and a fighter. I hope that one day she thinks more highly of herself and gains confidence in her strength.

The Conclusion:
There are so many plot twists and high stake situations that you’ll be sweating half the time. The characters really grabbed my attention and made me invested in their lives. I cheered when the protagonists succeeded and I cringed when the villains seemed to be holding all the cards. This story made me feel everything. I laughed, I cried, I was frustrated at times, but well worth the journey. I would highly recommend Absence of Color: Spectrum of Color Book 1 for all who enjoy coming of age fantasies. 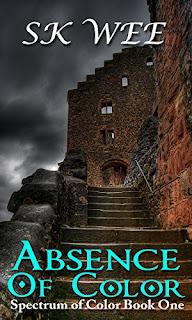 This review can also be found on: Amazon | Goodreads