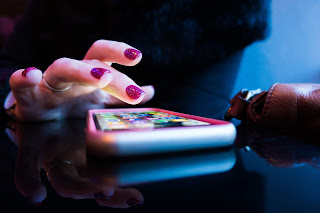 It’s amazing how much we now rely on technology. From the music we listen to, to the
conversations we have on a daily basis, chances are technology is involved in some way.

Even now I feel myself itching to grab my phone and check the notification I just received. But recently I found myself in an entirely different country with a limited vocabulary, a cellphone without data, and an opportunity to learn a very valuable lesson.

Sometimes I rely on my phone a little bit too much.

When my husband (Devin) and I landed in Munich, Germany we thought it’d be easy to find SIM cards for our cellphones. But after searching high and low at the airport, we finally decided to just head to our Airbnb and hope for the best. We hopped on the hour long train to Alstadt (Old Town) neighborhood. Good thing I’d brought the book “German Short Stories for Beginners” to read on the way. At this point we were late to our check-in, jet lagged from a 12 hour flight, and stressed because we had no way of contacting our host due to our phone issues.
With our carry-ons in hand, we raced from the train to our street. When traveling I hate going to places I could totally go at home, but in retrospect we probably should’ve stopped at a McDonald’s on the way to connect to wifi. But we didn’t. After arriving on the street of the Airbnb, Devin ran to a nearby grocery to see if they sold SIM cards. I waited on the sidewalk near our place.
Now, ordinarily this wouldn’t be a big deal, but it was 38 degrees (Fahrenheit) and I live in Texas so I’m definitely not use to this cold.

I’m standing on the street with our bags and it begins to blizzard.

Devin probably was only gone for about twenty minutes, but it felt like hours! When he returned, he had the SIM cards but apparently in order to activate them you have to be connected to wifi, which was only available at a McDonald’s that was a 30 minute walk from where we were. 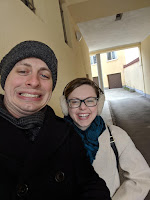 [Don’t be fooled by my smile. This is a photo of us actually freezing]
Without any other options we began walking. A few minutes in we realize we’ve been walking in the wrong direction and stop. I saw a delivery man loading stuff in his truck and I remembered I had learned a new word from one of the short stories. The word was “Empfang” (Network connection/Reception) and the story used this word because the girl in the story was lost. It was the perfect story to read before being lost myself!
I’m very much a beginner in German and my vocabulary is quite limited, but I decide to go for it. I walked up to the man and here’s what happened:
“Entschuldigen Sie,” (Excuse me) I said and the man looked up. He didn’t look angry so I continued with my very slow and careful German lol. “Meine Deutsch ist schlecht, aber ich lerne.” (My German is bad, but I’m learning)
“Gut,” (Good) he smiled.

He wasn’t tapping his foot impatiently or frowning so this was definitely a good sign.

At this point my German becomes a little… broken lol. I had forgotten to download Google Translate offline so this was by pure memory. The two words in bold are the new words I now have in my lexicon from reading German Short Stories for Beginners. “Empfang” (network connection/reception) is the word I learned that morning.
“Wir sind verloren,” (We are lost) I continue. “Wir sind besucher. Hier für eine Reise und mein Handy hat kein empfang.” (We are visitors. Here for a trip and my phone has no network connection).
At this point I need to get to where I’m asking a question, but I’m pulling as many words as I can remember and the word “to call” completely evades me!
“Haben sie eine Handy ich kann uh…call mein Fruend mit?” (Do you have a phone I can call my friend with?) I asked.
I believe the correct way to ask this question now is “Haben Sie eine Handy, mit dem ich meinen Freund anrufen kann?” (German grammar is so difficult!)
“Ja,” (Yes) he replied, then asks what my friend’s phone number is (I’m guessing, because he brought his phone out and looked like he was about to type).

I’m proud that I was able to make my first joke in German!

After he helped us connect with our Airbnb host he asks us where we are from and I say “Wir sind aus Texas, mit die Pferden.” (We are from Texas, with the horses) and the man chuckles “Mit den Pferden” (the correct way to say it). Devin and I both got a good laugh from my joke.
If you are trying to learn German and are a beginner, I would highly suggest reading this book. It’s taking me awhile to get through this book because it’s solely in German, but it has a list of new words at the end of each chapter and you begin learning German naturally. 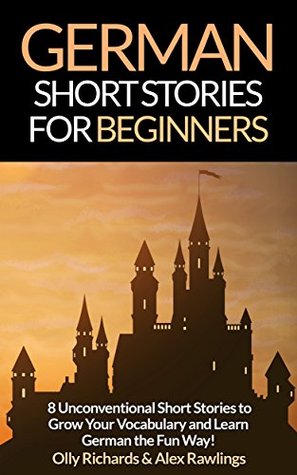 While on a train from Munich to Fussen, I was reading this book when a man interrupted me. He said that this book seemed difficult to him (he was from Germany and spoke German fluently) and asked me how much I understood of this book.
I told him that when I read this story I understand many of the individual words. When I get to a word I don’t know I check the vocabulary list at the end and I fill in the rest to get the main point. I may not understand everything, but I understand most of what’s going on.
He told me he did the same thing to learn English so that made me very happy! Check it out on Goodreads here.

So when technology fails, what will save us?

If you haven’t guessed it, books! When we can’t reach for a cellphone or a laptop, books are always there to inform us, challenge us, and they don’t need a network connection to provide us information. More than that, I find that I retain less information that I’ve obtained from searching Google or from my Duolingo lessons. But why is this?
According to an article by the The Queensland Brain Institute [1], memories are formed and strengthened by “repeated experience”. Remember the times when your research papers required you searching indexes and scouring rows of books? Now that we have the internet, these days are becoming less and less. But all those times we struggled to find information and finally found it we were strengthening our memory and recall making it more likely for these neurons to be reactivated at a later time.

Learning the word “Empfang” may not seem like a big deal. In fact, if I had downloaded German offline using Google Translate I could’ve just typed in English what I wanted to say and let Google do the translating. But this would’ve meant that the German sentence would’ve remained in my short term memory. Instead, this experience of getting lost, struggling to ask a stranger for help in a different language using only the words I knew at the time (no app or tech involved besides my noggin) means this experience and the vocabulary I used are more likely to be retained in my long-term memory (a.k.a. Long-term synaptic plasticity).

When we are challenged to look up from our phones and put into practice the knowledge we have, we are building long lasting connections in our brain. So maybe it’s a good practice to put the tech away every now and then and train our brain to obtain and use information in a different way. What do you think?

What is your strongest memory? Why is this event in your long-term memory?

How can we replicate this process for other knowledge, such as learning a new language? 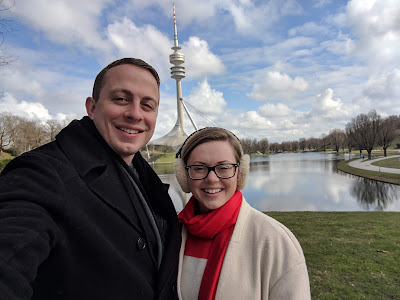